The Future Is Growth For Digital Advertising In Latin America

While many anticipated 2020 to be a year filled with economic growth in some countries and recovery in others, the unexpected arrival of the COVID-19 Pandemic, which led to global lockdowns as early as March, posed a major hindrance to the hopes and positivities economists expressed in times prior.

Now, as we enter the final stretch of 2020, businesses are finally beginning to stabilize again now that we’re rounding out the digital transition scramble and looking for ways to embrace the emerging opportunities that the pandemic has brought about.

There have been many negative advertising consequences associated with COVID-19, most of which directly impacted traditional media. So much so, in fact, outlook forecasts for traditional media going into 2021 are grim, with some expecting a 17.5% decrease in Latin America, according to emarketer.

Meanwhile, digital media is booming. With the adoption of more digital advertising, communication, and outreach, social media and other virtual technologies have seen a steady rise since the start of the pandemic, and it shows no signs of slowing down.

As some say, it was only a matter of time before the world went digital, but the pandemic encouraged rapid adoption. So, while many companies were weary at first to continue doing anything — including paying for advertising in an unsure world — numbers now reveal that around the world, and especially in Latin America, digital ad spend is on the rise as companies adapt to the post-COVID era.

Year-over-year, reports have revealed some astonishing numbers associated with increasing digital ad spend across Latin America. Since 2015, total ad spend has more than doubled, reaching $9.33 billion annually as of this year. Now, digital accounts for almost 40% of Latin America’s overall ad spending. Given the circumstances posed by COVID-19, these numbers are only expected to keep growing. Plus, the news only gets better if you narrow down the numbers further. 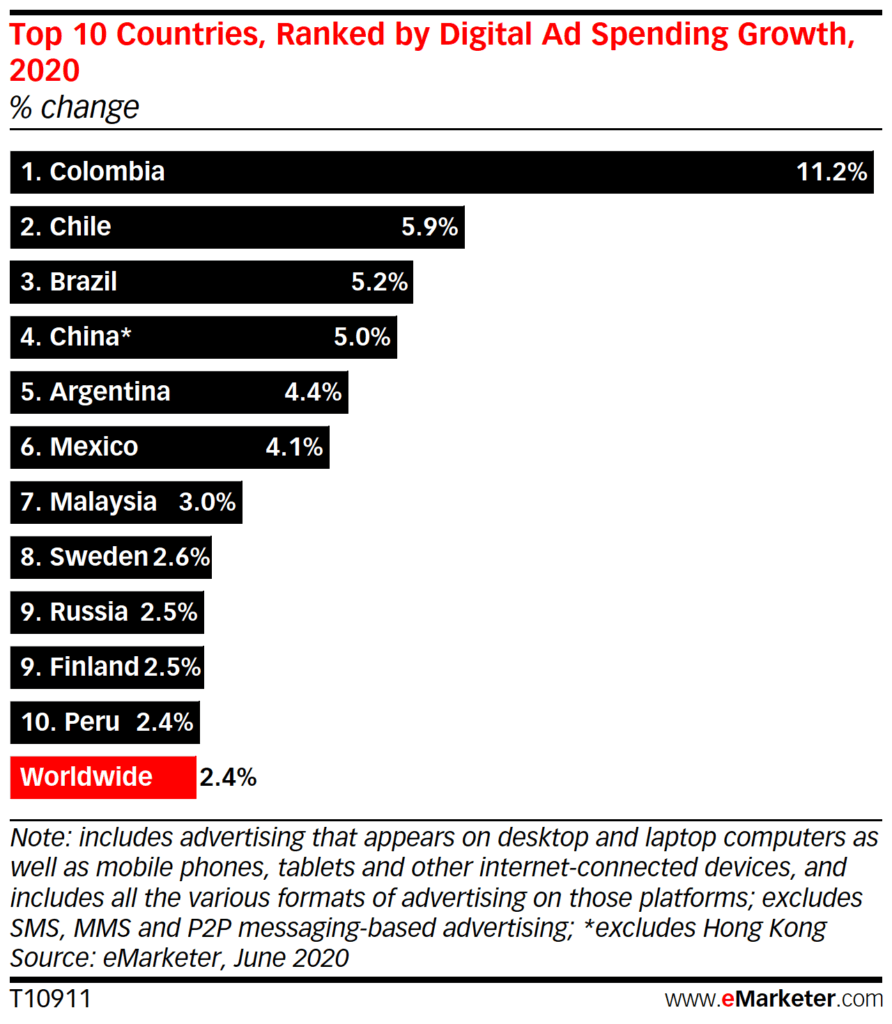 For instance, with the rapid acceleration of digital adoption across Latin America, six core countries will make the list of the world’s 10 fastest-growing markets for digital advertising — including Colombia, Chile, Brazil ranking first, second, and third, respectively. Following them will be Argentina and Mexico in fifth and sixth, respectively, and — finally — Peru will claim the tenth spot.

Digital Advertising Is The New Normal

There have been a lot of “new normals” amidst the pandemic, social distancing, and other guidelines that have resulted from COVID-19. Ultimately, businesses and consumers alike are still adjusting to them, but if the numbers prove anything, it’s that digital advertising will only continue to take a stronger hold of the markets in the years to come.

It was already growing, and with more people shopping from home and staying home, search and digital advertising is poised to remain the most effective, direct, and impactful way for companies to continue showing relevant ads to consumers as we shift to more online shopping and brand interactions.

If you are ready to grow your digital business to the next level, Get In Touch

How to Expand Your Ad Tech Business Internationally

Is IoT the next big thing in advertising?